The aim of this assignment is to give a more detailed description of the Celestial Triangle of N’shamah.

In the broader context of the Eits Hachayim, the N’shamah belongs to Olam Atzilute, the the Divine World of Ayin (The Void). This is the level in which the Divine Names manifest themselves.

On the scale of our solar system (fig.1), the planets Saturn, Uranus and Neptune are also associated with the S’phirot of the Celestial Triangle. 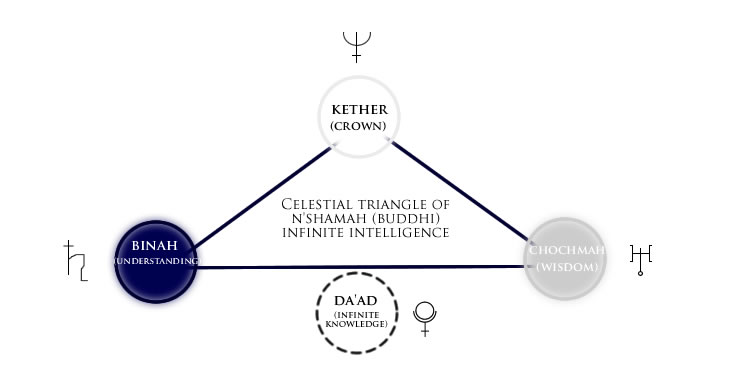 Emanating from the Ain Soph Aur is Infinite Intelligence, which is represented by the combination of the highest S’phirot on the Tree: Ketter, Chochmah and Binah. This is Hebrew for Crown, Wisdom and Understanding respectively.

A Crown is something that sits on top of the head, which indicates the nature of Ketter as the range Centre of the Ain Soph Aur, the total energy of Creation [1]. Kether belongs to Olam Atzilut, the Divine World. At this level anthropomorphic forms do not exist, Divinity is Light (Visual Modality), Sound (Auditory Modality) and Movement (Kinesthetic Modality) in its most abstract[7].

In Kabbalah this triangle is referred to as the N’shamah from the Hebrew word Nasham, to breathe. In Sanskrit, this category is called Buddhi which is a feminine noun similar to the masculine noun Buddha. A loose translation is Intuitive Intelligence or Higher Mind[1].

Wisdom (Chochmah) is a good word to sum up the resulting behaviour of being in touch with the Silence or Quiet Safe Space and leads one to intuitive perceptions. And Understanding (Binah) gives one an idea of the mental quality of conception needed to bring about creativity in any shape or form – a concept or idea is the prerequisite.

The Light that illuminates Da’at, Infinite Knowledge, is Sh’chinah (Hebrew) or Shakti (Sanskrit) or the Divine Mother. The basic unit of physical light, the photon, could be the result of the emanations from these two S’phirot. Within Da’ad is contained all blue-prints for life in existence, they only need to be brought to light, be made aware of.

Da’at fills the abyss because any concept, conceived in Binah, must be fully understood or “grasped with certainty” (this is one of the meanings of the word “know”) before it can come into manifestation. Often a creative work, like a book, takes years developing as it bounces between Chochmah and Binah before it is completely written down and published. This process is much like a hailstone as it moves vertically within a storm cloud gaining more layers of ice, before it is too heavy for the upward drafts in a raincloud and falls to the earth.

On the physical level, a baby is conceived by the sexual union of father and mother (Shiva and Shakti), the blue print (DNA) already exists (Da’at) – although physical form is refined as life evolves, perhaps to the point where the physical body is best able to reflect the divine blue print – Adam Kadmon (Hebrew for Primal Man. A similar concept in Sufism is called the Complete Man[10]). Da’at is beyond all energy, therefore it is not a s’phirah. It is the source of infinite possibilities which the energies of the s’phirot manifest according to their qualities.

“Da’at contains the Infinite Knowledge, which is eternally unfolding itself throughout eternity. Da’at in the Unmanifest, which becomes manifested through the s’phirot.

The planets associated with Kether, Chochmah and Binah are Neptune, Uranus and Saturn respectively. Pluto belongs to Da’at, Hebrew for Knowledge and in the context of the Tree, Infinite Knowledge.

“Astrologically modern Western astrologers associate the planet Neptune with idealism and compassion, but also with illusion, confusion and deception; with religions, spirituality and mysticism, the mass media, creativity in art and music, drugs, extreme sensitivity, fantasy and imagination, psychic phenomena and altered mental states. Neptune governs hospitals, prisons, mental institutions, and any place, such as a monastery, that involves a retreat from society [2]”. The above positive qualities are the potential attributes of Neptune, and the negative qualities, what appear to be manifested, when Neptune is afflicted, or its chakra is blocked.

“Astrologically modern interpretations associate Uranus with the principles of genius, individuality, new and unconventional ideas, discoveries, electricity, inventions, and the beginnings of the industrial revolution. Uranus governs societies, clubs and any group dedicated to humanitarian or progressive ideals. Uranus, the planet of sudden and unexpected changes, rules freedom and originality. In society it rules radical ideas and people, as well as revolutionary events that upset established structures[3]”.

“Astrologically Saturn is associated with the principles of limitation, restrictions, boundaries, practicality and reality, crystallizing and structures. Saturn governs ambition, career, authority and hierarchy, and conforming social structures. It concerns a person’s sense of duty, discipline and responsibility, and their physical and emotional endurance during hardships. Saturn is also considered to represent the part of a person concerned with long-term planning. The Return of Saturn is said to mark significant events in each person’s life. According to the first-century poet Manilius, Saturn is sad, morose, and cold and is the greater malefic[4]” Manilius’ opinion is based of what appears to be Saturn, when its chakra is dysfunctional.

“Astrologically Pluto is called “the great renewer”, and is considered to represent the part of a person that destroys in order to renew, through bringing buried, but intense, needs and drives to the surface and expressing them, even at the expense of the existing order. A commonly used keyword for Pluto is “transformation”. It is associated with power and personal mastery and the need to co-operate and share with another, if each is not to be destroyed[5]”.

Direct access to inner knowledge (Da’ad) brings about that profound transformation of the personality. The effects attributed to the action of Pluto, mentioned above, then occur.

Together, these chakras tune the energy-field into the Infinite Intelligence of the Universal Energy. They provide us with an awareness of the existence and presence (Sh’chinah) of what religion calls God, the Ain Soph Aur [6].

Binah and its chakras (Ajna and Vishudda), receive intuitive perceptions and bring these creative concepts (or ideas) into creation. This is the reason why Vishuddda is associated with this aspect of the Sphirah and considered to be a “co-creative” Chakra. It structures the ideas and concepts arising from Da’at.

5. N’shamah and the Third Noble Truth 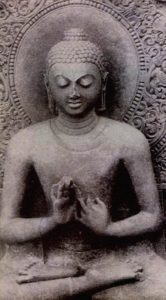 “Extinction of desire” comes from an unfolding awareness of the fullness of Being. It is not so much a destruction or suppression of desire but a recognition (awareness) that all that the personality may want or need (desire) comes from the higher consciousness. This is why these states of awareness are called the “Kingdom of Heaven” and also the reason why it is said by tradition that “The Kingdom of Heaven is within you”.

Due to its level of Olam Atzilut, N’Shamah is the closest and most undiluted reflection of the Silence of the that manifests the Ain Soph Aur. With the N’Shamah, the fullness of the Source, manifesting through the Ain Soph Aur, has the least distortion due to a lack of awareness. It is a Highly Sattwic state.

The celestial triangle of N’shamah is where creation comes together for the first time as it emanates from the Ain Soph, the Infinite. All later triads are simply reflections on a lower arch of this original trinity of cardinal, fixed and mutable forces. Thus Infinite Intelligence on the level of Ruach or Briah is Infinite Love.

By the same token, a compassionate personality is simply the manifestation of Ruach on the level of Nephesh. We therefore have a vertical alignment with the higher consciousness when compassion and discipline (Chesed and Geburah) has refined the personality of an individual.

“Refinement” of the personality is a part of the process of evolution, individual ego allows the return of its awareness to Divinity. The opposite process, the condensing of force into physical matter, is a process of involution.[9]